1858 (March)  Iowa Governor Ralph Lowe signs a bill providing for establishment of a state Agricultural College and Farm. Instruction would be
offered in 19 subjects, including botany.

1871 (December)  Dr. Bessey states in the Fourth Biennial Report of the college that the Herbarium is officially established and contains "representatives of perhaps about 2500 species." Bessey and his student J.C. Arthur list 588 species of Iowa flowering plants and ferns, the list is added as an appendix to the report.

1876  Dr. Bessey and Mr. Arthur prepare an exhibit of Iowa plants and woods for the nation's Centennial Exposition in Philadelphia.

1877  Mr. Arthur receives the first graduate degree (M.S.) from Iowa State Agricultural College upon completion of his studies in botany and zoology.

1884  (August) Dr. Bessey leaves Iowa State to become Dean at the University of Nebraska; he is replaced by Dr. Byron D. Halsted, who "did not add much to the Herbarium in the way of flowering plants, but he added a considerable number of fungi." Bessey reports that the herbarium contained approximately 15,000 specimens at the time he left.

1894  Dr. Pammel arranges for the purchase of the C.C. Parry Collection, which contains approximately 15,000 specimens collected in Iowa, the American west, Mexico, and other areas. The purchase price was $5,000.

1894  George Washington Carver receives a B.S. degree, and is the first African American to do so at Iowa State.

1900 (December 7)  Fire destroys a wing of the building (Old Main) housing the herbarium, but most specimens are saved or salvaged by remounting plant material from charred sheets.

1903   Harriette Kellogg was hired as curator of the herbarium and the botanical library.

1916   Harriette Kellogg dies of pneumonia. In the years preceding her death, she published papers on dye plants and medicinal weeds of Iowa.

1918  Ada Hayden receives a Ph.D.; she is the first woman to receive a Ph.D. at Iowa State College. 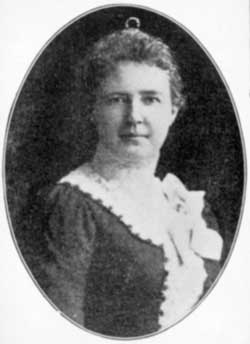 1929   L. H. Pammel resigns as head of the Botany Department and is replaced by Irving E. Melhus.

1933   Mr. Cratty prepares a checklist of Iowa's flora based on specimens in the herbarium.

1934   Ada Hayden becomes functional curator of the herbarium, continuing until her death in 1950.

1941   Mr. Jacob P. Anderson brings his collection of approximately 30,000 Alaskan plants collected over a forty year span to Iowa State college. They are later given to the herbarium and form the basis for Anderson's Flora of Alaska.

1944   Dr. Goodman leaves Iowa State to become a member of the botany faculty at the University of Oklahoma. Dr. Hayden assumes the official title of Curator of the herbarium.

1944   Dr. Duane Isely is hired as Seed Technologist. He donates his personal herbarium of over 4000 specimens, mostly legumes collected in the eastern U.S., Wyoming, and Colorado, to the Iowa State Herbarium.

1946   Dr. Richard Pohl is appointed to the botany faculty. He brings more than 1000 plants collected on the Texas Plains to add to the herbarium.

1948   Dr. Hayden reports that the herbarium has grown to 250,000 specimens. In addition to the Anderson Collection, Hayden also reports the gift to the herbarium of the Oleson collection containing approximately 23,000 specimens assembled by the Fort Dodge Botanical Club.

1950   Dr. Hayden dies of cancer, Dr. Pohl is appointed curator of the herbarium.

1966   Dr. Pohl travels to Costa Rica to collect tropical grasses;  this and numerous subsequent trips by Pohl and his graduate students, and more recently by Dr. Lynn Clark, establish a large collection of Central and South American grasses.

1968   The Herbarium and the Department of Botany and Plant Pathology move from "Old Botany" (now Catt Hall) to their current home in Bessey Hall.

1980   The Annual report of the Iowa State Herbarium, 1980, states that the herbarium has grown to contain approx 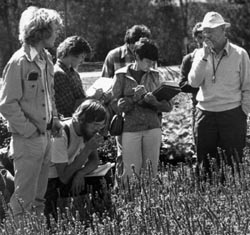 1984   Ms. Deborah Qualls (now Deborah Lewis) is appointed as a full-time curator of the herbarium. Previously the herbarium was curated by a member of the faculty, with student assistance for day-to-day operations.

1988   The herbarium is named in honor of Ada Hayden;  the 400,000th specimen is accessioned into the Ada Hayden Herbarium.

2003   The herbarium becomes a facility in the newly formed Ecology, Evolution and Organismal Biology Department

2004   The University of Iowa herbarium (IA) is transferred to the Ada Hayden Herbarium.

2020   The 150th anniversary of the founding of the herbarium! The collections contain approximately 650,000 specimens.

Click here to view the information sources for this page.