The first description of a Botrychium species was of B. lunaria, described in 1542 by Fuchs as Lunaria minor. Linnaeus recognized two species of Botrychium in his 1753 Species Plantarum, B. lunaria and B. virginiana. He placed both in the genus Osmunda. Presl (1845) was the first to use the name Botrychium, recognizing 17 species in his treatment of the genus. The first modern comprehensive treatment of the family was that of Clausen in his 1938 Monograph of the Ophioglossaceae. This publication provides the best reference point from which to discuss more recent taxonomic assessments and recognition of new species 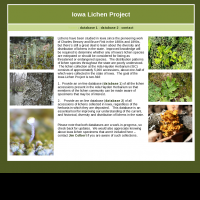 Lichens have been studied in Iowa since the pioneering work of Charles Bessey and Bruce Fink in the 1880s and 1890s, but there’s still a great deal to learn about the diversity and distribution of lichens in the state. Improved knowledge will be required to determine whether any of Iowa’s lichen species are extirpated or should be considered for listing as threatened or endangered species. The distribution patterns of lichen species throughout the state are poorly understood. The lichen collection at the Ada Hayden Herbarium (ISC) consists of approximately 5,000 accessions, about one-half of which were collected in the state of Iowa. 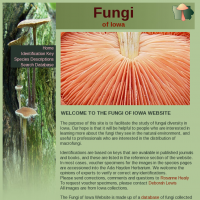 The purpose of this site is to facilitate the study of fungal diversity in Iowa. Our hope is that it will be helpful to people who are interested in learning more about the fungi they see in the natural environment, and useful to professionals who are interested in the distribution of macrofungi. The Fungi of Iowa Website is made up of a database of fungi collected in Iowa, species pages accessed through "Scientific Name Index" or "Common Name Index" that have images with descriptions, and an interactive key designed for use by the public. The key includes microscopic features, but knowledge of these features is optional for many of the species. 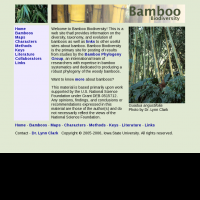 This is a web site that provides information on the diversity, taxonomy, and evolution of bamboos as well as links to other useful sites about bamboo. Bamboo Biodiversity is the primary site for posting of results from studies by the Bamboo Phylogeny Group, an international team of researchers with expertise in bamboo systematics and dedicated to producing a robust phylogeny of the woody bamboos. 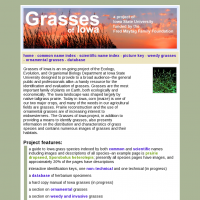 Grasses of Iowa is an on-going project of the Ecology, Evolution, and Organismal Biology Department at Iowa State University designed to provide to a broad audience–the general public and professionals alike–a handy resource for the identification and evaluation of grasses. Grasses are the most important family of plants on Earth, both ecologically and economically. The Iowa landscape was shaped largely by native tallgrass prairie. Today in Iowa, corn (maize) is one of our two major crops, and many of the weeds in our agricultural fields are grasses. Prairie reconstruction and the use of ornamental grasses are of increasing interest to midwesterners. The Grasses of Iowa project, in addition to providing a means to identify grasses, also presents information on the distribution and characteristics of grass species and contains numerous images of grasses and their habitats. 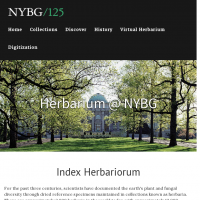 For the past three centuries, scientists have documented the earth's plant and fungal diversity through dried reference specimens maintained in collections known as herbaria. There are approximately 3,000 herbaria in the world today, with approximately 12,000 associated curators and biodiversity specialists. Collectively the world's herbaria contain an estimated 350,000,000 specimens that document the earth's vegetation for the past 400 years. Index Herbariorum is a guide to this crucial resource for biodiversity science and conservation. The Index Herbariorum (IH) entry for an herbarium includes its physical location, URL, contents (e.g., number and type of specimens), founding date, as well as names, contact information and areas of expertise of associated staff. Only those collections that are permanent scientific repositories are included in IH. New registrants must demonstrate that their collection is accessible to scientists, and is actively managed. Each institution is assigned a permanent unique identifier in the form of a one to eight letter code, a practice that dates from the founding of IH in 1935. 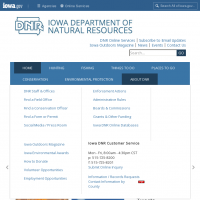 Leading Iowans in caring for our natural resources.

The Iowa Native Plant Society is a forum for plant enthusiasts, gardeners, and professional botanists to exchange ideas and information, and to work together to: encourage conservation and ethical use of Iowa's plants promote education about Iowa's plants, their habitats and cultural habits, and the preservation of these plants and their environment appreciate and enjoy Iowa's native flora INPS organizes field trips and promotes other native plant events on our calendar. We post pictures from some of our field trips. You can learn more about what's happening in INPS by reading the latest newsletter. Check out our new Books page for books recently authored by INPS members. 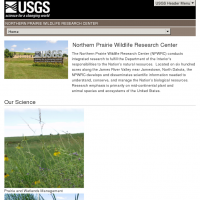 The Northern Prairie Wildlife Research Center (NPWRC) conducts integrated research to fulfill the Department of the Interior's responsibilities to the Nation's natural resources. Located on six hundred acres along the James River Valley near Jamestown, North Dakota, the NPWRC develops and disseminates scientific information needed to understand, conserve, and manage the Nation’s biological resources. Research emphasis is primarily on mid-continental plant and animal species and ecosystems of the United States. 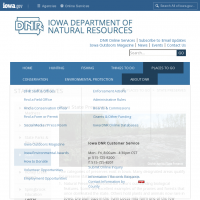 Preserves are established and overseen by a seven-member State Preserves Advisory Board, with the aid of state ecologists. Only carefully scrutinized lands are admitted to the State Preserves System. Each prospective area is visited to assess its scientific and educational qualities. All literature concerning the area is perused. If an area is deemed worthy of preserve status, the landowner and preserves board enter negotiations. The two parties draw up a mutually acceptable document describing the land's qualities, stipulating acceptable land uses, administrative details, and providing a management plan to maintain the land's natural characteristics. The managing body (which is often a private owner, county conservation board, the state or a private conservation organization) is declared. These details vary from preserve to preserve, depending on the preserve's features and the owner's desires. However, all provisions must enhance the goal of preserving the area's special features. The signature of Iowa's governor formally dedicates the parcel into the preserves program. Individuals and public agencies owning land with outstanding features are encouraged to consider dedicating the area into the state preserves system. Land may be dedicated in several ways. Some landowners dedicate land as a preserve while retaining private ownership. Some donate land to the state. The state may dedicate land already in state ownership. 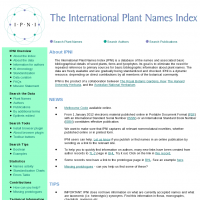 The International Plant Names Index (IPNI) is a database of the names and associated basic bibliographical details of seed plants, ferns and lycophytes. Its goal is to eliminate the need for repeated reference to primary sources for basic bibliographic information about plant names. The data are freely available and are gradually being standardized and checked. IPNI is a dynamic resource, depending on direct contributions by all members of the botanical community. IPNI is the product of a collaboration between The Royal Botanic Gardens, Kew, The Harvard University Herbaria, and the Australian National Herbarium. 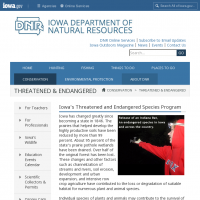 Iowa has changed greatly since becoming a state in 1846. The prairies that helped develop the highly productive soils have been reduced by more than 99 percent. About 95 percent of the state's prairie pothole wetlands have been drained. Over half of the original forest has been lost. These changes and other factors such as channelization of streams and rivers, soil erosion, development and urban expansion, and intensive row crop agriculture have contributed to the loss or degradation of suitable habitat for numerous plant and animal species.